KEIZER, Ore.–  The Oregon Royal Upperclassmen squad had just rallied back to tie with the Washington Kelly Tuesday morning at Keizer Little League 2-2.

The squad had rally bats, but couldn’t squeeze out their third win in Pool Play as the squad turned and burned for the fourth-fifth place game.  Going from Field 10 of the facility to Field 4 against the Idaho Cardinals squad.

“It was good to see us finish strong because we were coming off a tough loss yesterday.  We didn’t play as well yesterday for our last game, so it’s good to comeback and see that we can actually can do it, especially not knowing each other,” said Loughary, who played second-base in the game.

Her first at-bat of the 4/5 game came in the Top half of the second inning, a single, moving Molly Routson (Hood River Valley) over from second to third.  But the squad couldn’t capitalize on the opportunity in a scoreless game at that point.

It’s been an interesting Spring and Summer for sure for Loughary.  Appendicitis had knocked the Dragon infielder out of the rest of basketball season and had just got cleared to play the day before Coronavirus had canceled the Spring season across the State.  But it ensured that nothing lingering could have unhinged her season had it continued.

Luckily, the Pandemic didn’t entirely cancel the travel softball season for the incoming Senior, giving her some part of a season playing with the NW Bullets organization.  Traveling to get games in and the reps she missed out from the Spring.  Playing in Washington, Utah and The Dalles, Oregon to name a few spots she played in.

For the Dragon infielder, she just wanted to get back on the field.  Doesn’t matter when, where or how, whatever works to get on the field again and get those important live reps she needs to improve.

“I’m just grateful to be playing again.  I’m just happy to be playing, even if we have to wear the masks, I don’t really care.  I just want to be on the field,” Loughary said.  “I want to improve on tracking balls and hitting better.  Live reps are what matters, so that’s what helps me.”

The Royals plated a few runs in the top of the fourth as their defense hung two zeros on the board to start the game.  Loughary grounded into a fielder’s choice with the bases loaded in her second at-bat.  The throw-out at home kept the bases loaded with Loughary at first.

Loughary had the 4-3 put out to Canby’s Abigail Loomis for the second out and caught a shallow infield fly to close out the fourth inning.  Slowly the squad had separated themselves from the Cards as they managed to get the seven-innings in right before the time-limit as Oregon finished fourth in the Fastpitch Northwest Championships Tuesday, going 3-1-1 in five games.

“That was good.  It was nice to finish strong on the week,” smiled Loughary. 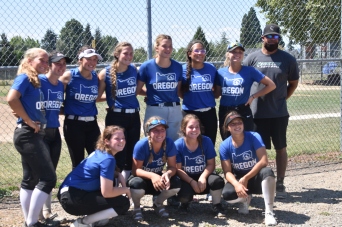 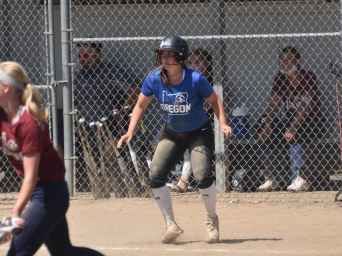 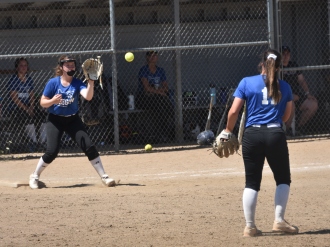