KEIZER, Ore.– Torn labrums are no fun. Surgery. Recovery. Getting cleared and the green light to return. The process sucks. But, as the summer softball season kicked off for the NW Vandals 16U Saturday at Keizer Little League Park, McNary’s Abbi Covalt returned to the diamond with her squad nearly a month after being cleared to throw again.

Covalt, who had surgery in November, splitting time DH-ing and playing first base in the Vandals first game against the Oregon Red Heat 16U. The incoming Celtic Senior went 2-for-2 with 2RBI’s in the opening game before returning to second base in the second game against the Bat Company Benson.

“It’s so nice, I love playing with our team. I think we have a really good infield. It’s really nice to be together and not just everywhere, we have a lot of Bend girls, but I thought we did a good job,” said Covalt.

Bend’s Allison Parker struck out ten Red Heat batters in the opener as everyone knocks off the rust of not playing for a few months on a warm Saturday afternoon. When the game started against Bat Company, West Salem’s Aliyah Wilsey got the nod against the Vandals and some of her Titan teammates in Reagan Davis and Maison Searle.

It was Wilsey’s first game out of the gate since her final Fall-Ball Game in November, but the incoming West Salem Senior came out clicking. In three innings of work Wilsey struck out five Vandal batters and only gave up two runs before going to third base for the remainder of the game.

“I definitely surprised myself because I mentally walked in thinking I wasn’t going to do well in my first game since November, so I just had to have fun,” starts Wilsey. “We’re on dirt for the first time in a while so I had to relax because I know I pitched better like that and just let it fly basically.”

Entering the fourth inning the Vandals led 2-1, but slowly the bats rallied. Four runs in the fourth followed and another in the fifth as they ballooned their lead to 7-1 entering the bottom half of the fifth inning.

“We’ve been practicing a lot and it’s hard to be so fresh with all the COVID-stuff going on, but I thought we did a really good job. Talking to each other and working together,” said Covalt.

Covalt, Lena Zahniser and Shaylee Custer recorded two hits each in the 7-2 win over Bat Company. Custer drove in 2RBI’s herself.

There’s always room for improvement, it’s June and it’s the first time out playing ball this calendar year. There’s always going to be another game down the road to show what you got.

“It was definitely rough and as time went on, we definitely saw the rust that we have built up over these last couple of months. Especially our hitting, we’ve haven’t seen live pitching in a while so we know what we need to work on now. Finding a facility where we can work on hacks,” said Wilsey. 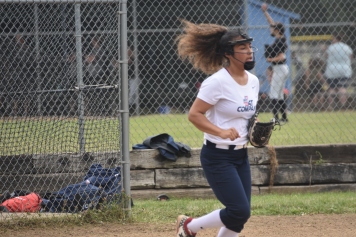