MEDFORD, Ore.–  Their day started at 6:45am when they came to US Cellular Fields in South Medford Sunday as they won their first game of the day 8-0 over the Sandy Thunder to face one of their toughest challenges in the tournament with the NW Batbusters Lever at the South Valley Triple Crown Tournament.

Kiani Nakamura gave the NW Vandals 16U a 1-0 lead entering the third over the top-seed in the tournament and the Batbusters had their chances, especially in the sixth when the NW Batbusters 16Us had runners on second and third.

The Vandals shut them down as Jade Beaumont brought home Taylor Sibernagel on a bunt that gave the NW Vandals squad a 2-0 lead.

“We don’t pull off a lot of bunts, like we haven’t in the past,” starts Beaumont who went 3-for-11 with 3 RBIs. “We were bunting like every single play and it was a really cool play to be able to make.  It got everyone ready for what was coming.”

Back-to-Back home runs from Camryn Boyles and Allicite Frost in their 4-1 win over the Firecrackers Leles 16U.  They rallied back from a 6-1 deficit to defeat the Bandits Fastpitch 16U 10-7 thanks to a six-run fourth inning that handed NW Vandals a 7-6 lead.  Three batters singles with two bases load walks and a ground-ball resulted in runs in that one big inning.

The Firecrackers tied it up in the top half of the sixth at seven, but the Vandals scored three more times in the bottom of the seventh to send themselves to the Championship game.

“It was just kind of giving everything and we did that in every game.  Just giving it all we had and fueling up in the five minutes before the game and just giving it all every game,” said Nakamura on the approach Sunday.  Nakamura went 3-for-9 with two RBIs Sunday.

“As we won, we fed off of everything and then energy just stayed kind of hot and wanting it,” adds Mackenzie Scott who went 4-for-12 with 4RBIs Sunday.

The last two times that the NW Vandals came to Medford over the Summer, they walked away with first place.

But it was battle of fatigue versus a Frase Valley Fusion team that that made the trip down from Vancouver, British Columbia in Canada that was eager to go back home with first place.

Mackenzie Scott (groundout RBI) and Reagan Davis (RBI Single) gave the Vandals a 2-0 lead after the top half of the inning before the Fusion exploded for nine runs over the next two innings to lead the Championship bout 9-2.

Slowly in the third however, the NW Vandals looked as if they were slowly waking up for one last rally for the lead as Beaumont scored on an error and Boyles hit a two-run double to cut the lead to four entering the bottom half of the inning at 9-5.

Fatigue would be too much down the stretch for the NW Vandals, as the fatigue of playing five games in one day wore down the Vandals in the 14-6 loss though the effort didn’t relinquished during the game.

“We were fried.  I think if were less tired we would have done much better, but I’m really proud of this team,” said Boyles.

Regan Davis went 5-for-15 and 5RBIs.  Allison Parker struck out including 10 against the Firecrackers-Leles 16U team. Parker pitched 8.2 innings with 12 strikeouts Sunday. 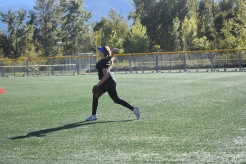 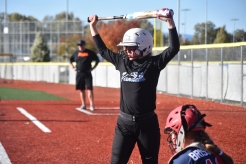 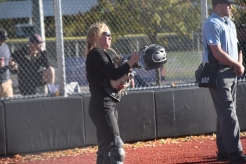