NEWBERG, Ore.–  The NM Magic 16U squad had just made the game interesting with two outs on the board against the Newberg Ambush Sunday night at the Crater Fields of the Darnell Sports Complex.

It was the first weekend of the Fall Ball Sunday Games and the Ambush had just lived up to their name and challenged the Magic in making stops defensively and trying to get to their arm in Baylee Nix.

“(Nix) is a good pitcher, there’s no doubt about it.  We can hit her and we put ourselves in a tight jam and that’s what happens,” said Magic Co-Head Coach Rob Shaffer.  “Like we talked to them, they need to be more patient and more selective at the plate and that will come.  More practice time and we’ll get after it this week.”

Nix and her defense allowed a few crooked numbers to get on the board, allowing three quick runs in the top half of the first inning before settling down.  The Newberg squad were led by one of their own in the Tiger freshman, who drove in four of the Ambush’s first five runs in her first two at-bats alone, as their bats came around after their 13-0 defeat to the Redlands earlier in the day.

A driven force for sure entering their nightcap against the Magic as the hits and runs came.

“A big hit always helps and I think that drove us to win that game,” said Nix, who went 3-for-3 with 5RBI’s in the win.

The Magic wheeled in Newberg to tie it in the top half of the fourth before the Ambush answered with four more runs against the North Marion squad.

But as the Magic seemed down-and-out, they answered down 9-5.

Stella Koch walked and slowly found herself at third before stealing home.  9-6.  The Magic drew another walk before Pressley Stadenmaire hit a triple to bring the away NM squad to two with two outs on the board on Nix and her Newberg squad.

A nice put-out play from Cici Smith to Kylie Kendall however would end the threat and game with the Ambush taking the game 9-7 over the Magic.

“It’s difficult especially being a pitcher, but I know my teammates got my back so I wasn’t too worried about it being a problem if it was another base-hit.  I knew we’ll be ok,” said Nix.

“Oh, that was awesome.  I told them I was proud of them because they fought until the very last play and that was a great play by their shortstop,” adds Shaffer.  “If that gets through the hole we’re down by one with a runner on and middle of our line-up and they look good.”

The Magic’s Ava Shaffer struck out four and had two of the squad’s three triples going 2-for-2 with an RBI in the game, the lone NM Magic batter with a multi-hit game.

Kendall, Maggie Saunders and Amelia each had two hits apiece in the victory for Newberg Sunday night. 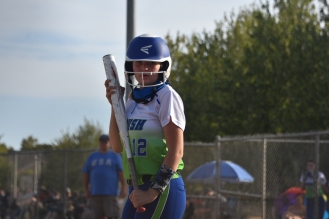 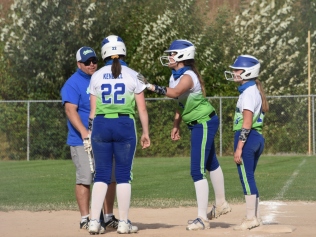