KEIZER, Ore.—It’s not how you start, but how you finish,

It wasn’t pretty but the Salem Aftershock 16U found a way to finish to advance in the NAFA Summer National Tournament Friday afternoon at the Keizer Little League fields against Gravity.  Taking the game 6-4 as their coaches talked about sometimes, you’ll get an ugly game along with those decisive one’s.

Gravity built a 4-0 lead on Meghan Boyles and her defense, but slowly the Aftershock began to come around as Cierra Hernandez and Bella Elliott drove in runs to cut the Gravity lead to a manageable 4-2 deficit.  Hernandez’ hit was of the single-variety while Elliott’s was of the double-variety.

“We just have to work hard thoruhgout the whole game and make sure our energy is up.  Just push through the game, even if we’re losing we can always come back,” said Hernandez, who went 3-for-3 with 4RBI’s in the 6-4 win.

Boyles turned the three-up, three-down innings in each of the fourth and fifth innings as both squads were up against the time limit in the tournament.

The Aftershock loaded up the bases to start the bottom of the fifth with singles from Sam Viniti, Tianna Perez and Sami Curran.  Talia Perez drove in a run that pulled the Salem Aftershock to within one.  Tianna Perez was called out at third, but Boyles singled to reload the bases with one out.

Hernandez came up to the plate, and on the first pitch that she saw, cleared the bases with a stand-up triple to walk-off the win and pushing the Aftershock into the second round of the NAFA Summer National Bracket Friday afternoon.

“It was definitely nerve-racking,” said Hernandez.  “We had one out, bases were loaded and we just had to put the ball in play and hope we scored and that we win.

“We’re going to play tougher teams the higher we get up there, so we got to make sure we do our fundamentals and do everything we need to do.  Make minimal errors.  The less errors we make, the better chance we have going to score.”

Cierra Hernandez went 4-for-4 with 5RBI’s in the two games Friday.  Boyles went 3-for-4 while striking out six in five innings against the Gravity. 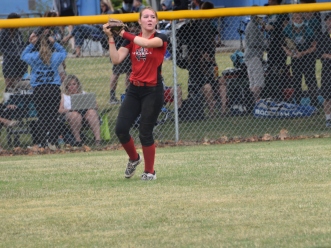