SALEM, Ore.– The mixed bag of pitchers that the Blue team threw at the Green squad Monday evening had tamed the bats of their opposition until the last out of the game.

Western Christian’s Owen Stalnaker got the starting nod on the bump as the Blue squad cycled out arms every two innings to save on pitch count. The Pioneer ace struck out three in his two innings as the Blue Wave held the Green squad to two runs entering the final out of the game.

Each pitcher picked up from the last and continued it into next. Striking out a combined nine batters in the process of building a 5-0 lead on the Green Machine.

“It was really good because we have a new pitcher who was throwing strikes out there which was good because it kept us in the game. But yeah, it was great seeing everyone being able to throw strikes there at the end,” said Stalnaker, who struck out three in his two innings.

For the Green squad, it took them until the latter half of the contest to break the shutout with a Toby Mask (Scio) RBI double in the fifth inning. South Salem’s Andrew Norman drew the squad closer, scoring off an error in the sixth to make it 5-2 as they settled down on both sides of the rawhide to get back to within reach of the Blue team Monday.

“We did alright, we really like to get down and then start hitting. I think if we start hitting earlier in the game, we’ll probably do better next time,” starts Mask. “It’ll be huge. It shows how much damage we can do when we swing the bat.”

The Green squad slowly got themselves into a bases-loaded situation with two outs in the seventh inning down 5-2 when Sprague’s Thomas Krummen drove a ball into the outfield. The Blue outfield ran it down and threw it into Stalnaker at shortstop. Stalnaker threw it to McKay’s Dillan Brady at home.

“It was me and the second baseman and I called for the relay,” “I saw (Mask) going home and I just threw it and it happened to be a good throw.”

Two runs had already come across home with Mask screaming at Brady when Stalnaker made his throw. It got to Brady as Mask was sliding home for the possible tying run. Brady made the tag to clinch the 5-4 win for the Blue squad moving into their Friday match-up at Holland Baseball Park in Salem.

First pitch is at 5pm. 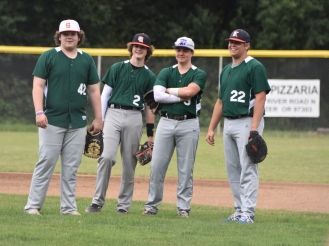 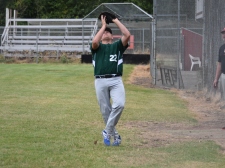