SALEM, Ore.— The Titans Baseball Club’s Brody McMullen walked into a pressure cooker situation in relief for Kaden Reidhead on the hill.

The strong start that the Green Machine had entering the seventh inning in building a 5-0 lead into the seventh inning had been reduced to 5-3 with two outs on the board. Runners were on first and second following Camden McGath’s RBI single to pull the Olympian squad to within two of the Titans.

“Honestly it wasn’t really nerve racking at all, I just came in and did my thing,” said McMullen. “I never really got nervous when it comes to baseball, I just got to come in and do my thing.”

Entering the seventh, both teams had showed flashes of strong defense and pitching. Cameron Hagan got the start for the Titans and Jackson Muth for the Olys. Both went three innings, Hagan finished with seven strikeouts to Muth’s seven over the same path.

The lone different in the game was the Titans were capitalize on the opportunities against Muth and Rory Lampe while Evan Faust picked up where Hagan left off in continuing the dominance from a defensive side.

Crosby Albee scored the opening run off a pass ball, the first of two Titan runs scored off errors with Reidhead scoring off one in the sixth, Wilson Neitzel and Ben Nagle each drove in runs to help build the lead.

The rust was there. Outside of a few of the Titan players, many of the kids on the diamond Wednesday evening haven’t played an out since last Spring or Summer, but the fight was there entering the bottom of the seventh.

But as their first game of 2020 was drawing to an end, a break happened when Chris Rogers drove home Kyle Hinchcliff on an RBI Double. Hinchcliff reached second the at-bat prior, reaching on error to represent the first run for the Olys

Dante Walker brought home Rogers before McGath’s at-bat pulled the Olympians to within reach of the Titans with two outs on the board, down two and with two base-runners in front of them.

“We came into with two outs, so with full-count I knew I had to do something for the team. So I decided to get in there with the mentality of extra bases and keep the rally going,” said Rogers of his hit.

For McMullen, he stepped in for Reidhead knowing what the situation was with the Olympian Baseball Club looking to complete the comeback rally. The save opportunity took four pitches, but McMullen finished the job and shut the door on the Olys rally entering Saturday’s games for both squads.

“You never know what you’re going to get. I just came in and did my thing, just throw strikes and it’s all I could really do,” said McMullen.

The Titans play the Stayton Bandits Saturday morning at 9am, the Olympians play Central at noon and the Bandits at 6pm Saturday as well. All games will be at Holland Park.

As their first game of the season wraps up knowing what they have an ability to work on those little things moving forward.

“It’s good that we can even practice now, we got our practice facility that’s available so that’s just getting out there and coming out with 100-percent intensity and work on the things we need to work on,” said Rogers. 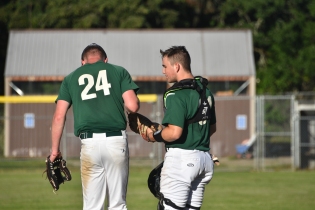 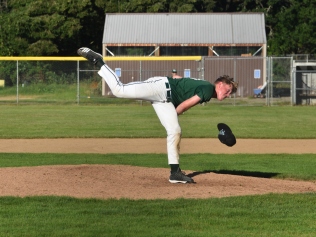 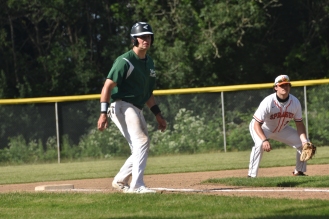 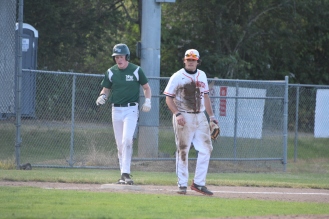 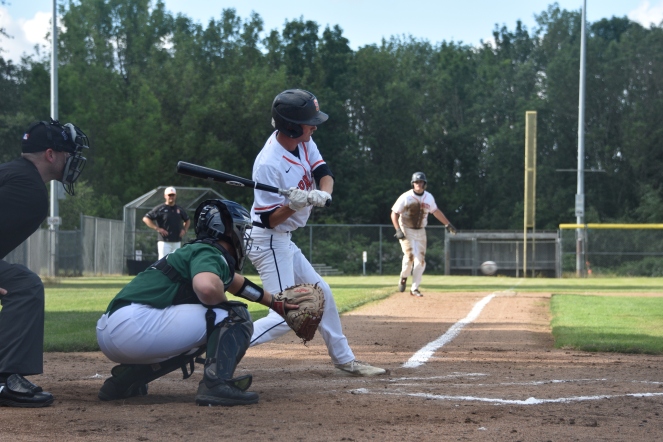