NEWBERG, Ore.–  Ava Shaffer came in focused and ready to go in the NM Magic 06 14U pool play opener against the Oregon Wild Wild 06 14U in the Newberg Father’s Day Tourney at Jaquith Park Friday night.

Through the first seven outs, Shaffer owned five strikeouts as her offense backed her with five runs in support.  Shaffer herself collected an RBI off a triple as the Magic led it 5-0 entering the bottom of the third inning.

The two teams met two weeks ago across town at the Darnell Wright Sport Complex when the Magic rallied the troops to put a scare on the Oregon squad late, and it seemed as if the week off didn’t phase the momentum, they had in that Sunday game on this day as their defense cleaned up the little things over the two-week break.

“We worked on our defense in practice.  We had errors to fix that happened last game.  We just talked about jumping on the pitcher early,” said Shaffer.

The Magic defense didn’t commit an error in the books Friday, a different tune from the four they committed in their last game against the Wild, holding their opposition to four hits on this evening.

Just as the bats and the defense were on fire however, Shaffer and the Magic defense were challenged in the bottom half of the inning by the Wild.  The Oregon Wild Wild, an out into the third inning had broke Shaffer’s no-hit bid with a blooper to shallow right field that led to their first run of the game the next at-bat, eventually loading up the bases and clearing them to pull within one of the NM Magic 06 14U off a Jackie Laeng double.

Shaffer settled back down to get her seventh strikeout, her sixth coming before Laeng’s bases clearing double, to end the inning with the lead intact.

The Magic drove home two runs in the top half of the fourth inning as it came down to defense to finish the game up 7-4.

“It was nice.  In the last game we came back and see it work and come out ready to go this week,” said Shaffer.  “We knew we had the good bats and I knew I had a good defense behind me in the circle

After a quick single, Shaffer picked up her eighth strikeout, Genevieve Trentzsch got the put-out for the second out.  Wild Wild drew a walk with runners on first and second, they advanced on a wild pitch with the tying run at the plate.

A wild pitch allowed a run to cut the lead down to two with two outs. Coach Robert Shaffer called time to calm down the pitcher, who threw back-to-back strikes to end the game with a 7-5 victory.  The younger Shaffer finished with nine strikeouts as the NM Magic 06 14U drove in a total of five runs of their seven as they play the Thunder Saturday at 6:30pm back at Jaquith Park in Newberg. 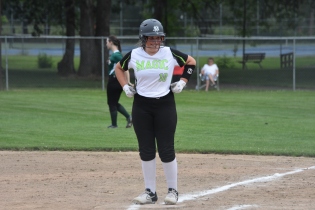 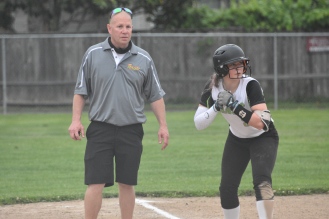