PENDLETON, Ore.–  They remember the speech that their coach gave them before the start of their fourth-place game againt Oakland.  Don’t have any regret, it was their last game of the year.

And boy did they make the most of it.

In the first half of their 60-43 win over the Oakers, Santiam caught fire to close out the first half.  Matter of fact, 12 of their last 14 points as the Wolverines entered halftime leading 36-20 came way of the three ball.  Four three-pointers with Chaz Storm owning three of them and Kobe Dyer having the other as Santiam made a statement that this was going to be their final stand on the year.

“We just came out and played it like our last game of the year, which it is and we just put it all out there,” said Dyer.

Dyer and Storm each connected on three three-pointers apiece.  Storm, the sophomore, was 3-for-6 from deep while Dyer, the senior, went 3-for-4 to finish with nine points as Santiam went 9-for-18 from deep in the game.

It was a passing of the torch almost.  This mission was to avenge last season’s fading sixth-place finish, and the Wolverines stayed loose during Oakland’s 8-0 run to wheel Santiam in 41-32 2:20 left in the third.

“We just had to take care of the ball and take good shots.  We knew they were going to fall eventually,” said Storm.

Storm has already made a name for himself entering his sophomore year and took his game to the next level this year.  The Wolverine sophomore recorded his second double-double at Pendleton Saturday morning with a 11 point, 12 rebound game while adding three blocks to his name.

And though the Wolverines are losing their point guard in Colin Thurston, defensive stud in Hunter Reeser and key guys like Dyer, Aiden Aerni and Quinton Cook to graduation…Santiam will have guys behind them in Erza Downey to fill in those key roles with the expectation to return back to Pendleton next season.

“This is going to be very important.  We’re going to be in the gym every day this off-season, just trying to be the best that we can be,” said Storm.

For the Seniors leaving, Aerni finishing with 10 points in his high school finale, Thurston adding another nine-point, four rebound performance with Dyer’s nine-point, three steal game, the plan was the final.  And though they fell short of the goal, their revenge tour to build off of last years performance left them with a good taste in their mouths with Spring and Graduation on the horizon.

“This was a revenge tour for us for sure.  We played bad last year and we wanted to take it back and take that fourth-place trophy,” said Dyer. 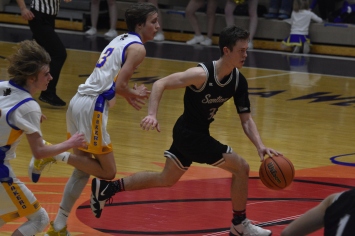 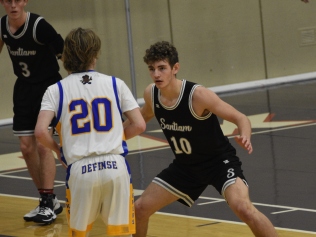 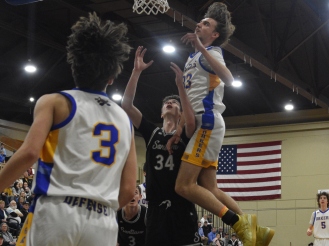