PENDLETON, Ore.–  Kennedy left no doubt in their dominate 48-26 win over Monroe Saturday evening at the Pendleton Convention Center.

The Trojans worked the inside game during the opening eight minutes while their defense did what do best:

Shut down their opposition.  It was 17-4 after one.

With how much of a well-oiled machine Kennendy has been, they don’t look at the score and take it that they have it.  Yes it was Day 3, gas tanks are towards empty and that 13-point lead can be gone as quickly as they achieved the lead, but that strong start was expected for them after two tough games in Pendleton against Coquille and Bandon entering the Final.

“We were working towards it definitely,” said Elise Suing of the start.  “We’ve had a couple hard games coming into this tournament and in the tournament the first two days were tough.  We knew that getting through those two games helped us a lot.

Sure enough the Dragons swiftly got themselves back into the game with 2:14 left in the opening half thanks to a 11-3 run that had the lead to ten.  A four-point swing, all by Ellie Cantu, pushed the Trojan lead to 29-15 by half.

Like a boa constrictor with its prey, the suffocating defensive pressure applied by Kennedy rallied back around Monroe into the second half, five points were allowed in the third as their offensive prowess reminded the same.

The chants of ‘JFK’ from their fanbase that traveled from Mt. Angel to Pendleton, the emotions as the seconds ticked off as the Trojans celebrated their third title in five years Saturday night.  They’re like the San Francisco Giants of 2A Girls Basketball, every two years they brought home the title.  Saturday’s win was just their third-in-five years.

Emotions build during the second half with that strong third quarter, Sophia Carley kicked it out to Meah Carley was a special moment for the Senior especially as the elder Carley let out a cheer of excitement on the basket seconds later.  Sophia Carley, Grace Schaecher and Catherine Butsch all reached the mountain tops to finish off their High School Careers.

“It’s bittersweet.  I’m really excited and I’m really going to miss my teammates, my coaches and the community, but I’ll be back to support them,” choked up Sophia Carley.  “It was great to see my sister out there because she’ll be here hopefully next year, she’s going to fill my shoes and she’ll be better than me.”

Cantu received first-team all-tournament honors, Arritola got second team as the Trojans look to retool without Sophia Carley and Schaecher in their lineup next season.  But with their core with Cantu, Arritola and Suing returning, Kennedy will be up for the challenge of trying to repeat.

Cantu finished with 16 points and four boards.  Arritola had four points and five rebounds in the win. 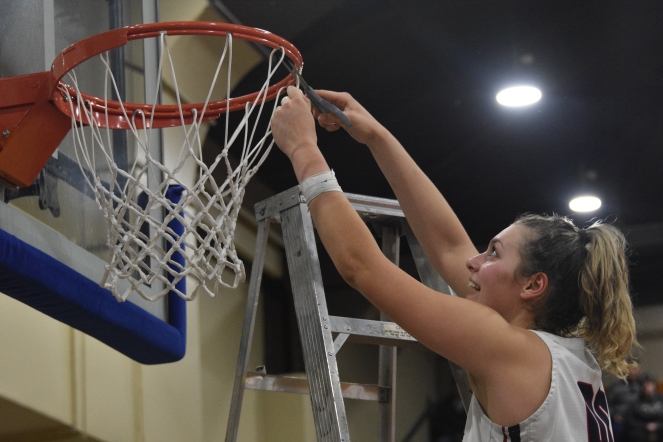 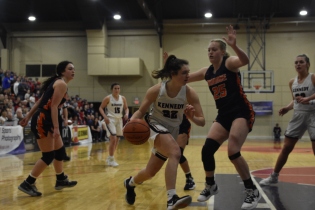 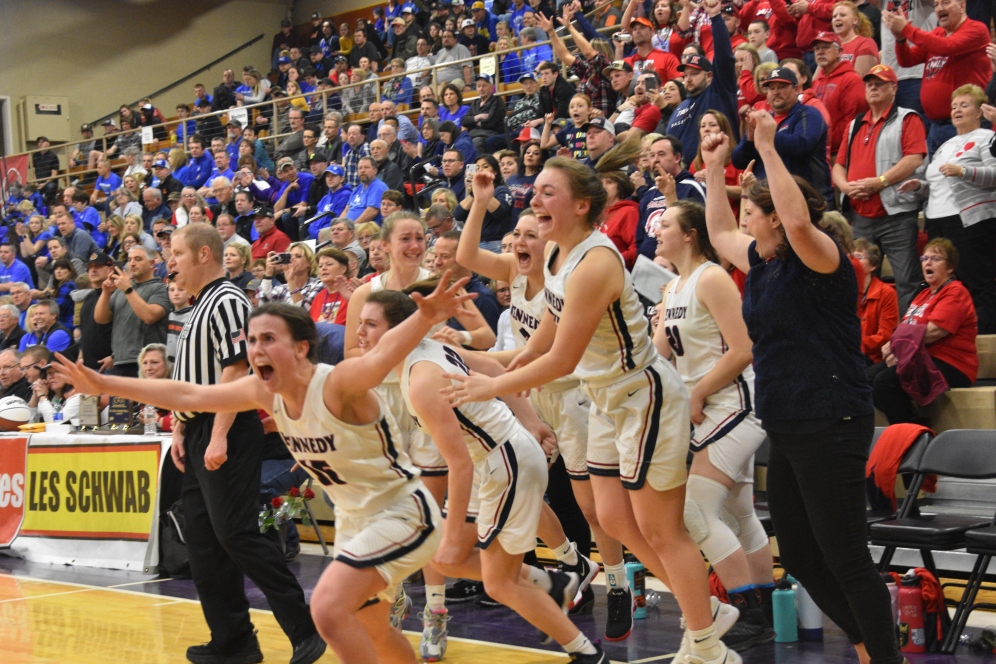