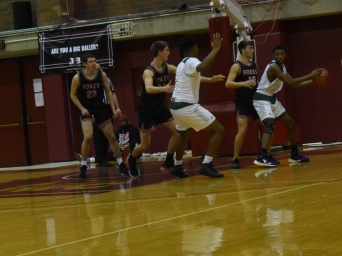 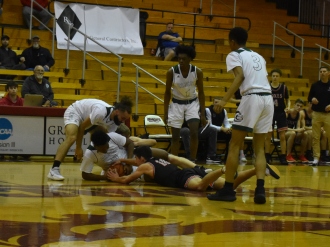 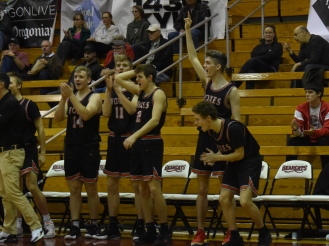 SALEM, Ore.–  That first quarter was something similar to the dominance of the Showtime Lakers of the 1980s.

You may get five three-pointers in a game, you may get 30 points in a quarter once a year, Silverton did that in the opening quarter of their 111-50 win over Parkrose Sunday afternoon at the Capitol City Classic.

They defended, rebounded, transitioned like midseason form coming off of their tough loss to Sherwood Wednesday night.  It was almost like the Nutcracker ballet in the way they were able to get up-and-down the court.

“We just got determined after that loss.  We felt like we shouldn’t have lost, we felt like we didn’t play our best basketball that game,” said Grant Dunn.  “The next few games we’re coming out and we’re doing this to teams, we’re showing what we can really do now.”

Dunn and David Gonzales each finished with over 20 points in the game.  Dunn finished with 28 points and Gonzales added another 23 for a Foxes offense that produced 17 three-pointers in Sunday’s game that came off the heels of their 84-45 victory over Thurston.

By the third quarter the Foxes trickled in their bench players that continued their mojo.  Rancho Christian of California had the highest point total of the tournament until Sunday.

The hundoburger is like a unicorn of sorts in High School sports.  The closest Silverton themselves got to the elusive hundoburger, century mark point total was 92 against West Albany on January 25, 2019.

They were at 93 to start the fourth quarter and by the 4:29 mark in the final eight minutes, Nathan Brown connected on a three-pointer the got them to 100 points from 97, joining the Eagles as the second team to surpass 100 points in the Capitol City Classic tournament.

And as they surpassed even Rancho’s 101 points against Sherwood, the team that defeated the Foxes Day 1 of the tournament, Silverton’s showcasing what they’re capable of.

Gonzales echoed what the Foxes Head Coach Jamie McCarty tells them before every game as their point of emphasis coming off of their eye-opening defeat to the Bowmen a few days ago: