ST. PAUL, Ore.– Thursday’s game was a late add for both St. Paul and Warrenton. Both squads are sitting on-top of their respective conference in 1A and 3A entering league playoffs, so the extra live reps were helpful in preparation in the Buckaroos and Warriors playoff pushes this season.

“It was really nice because we’ve never seen this team before and that’s something to expect at State,” said St. Paul’s Kaylee Sutherland. “Seeing new teams, not seeing any film and just having to adjust to their hitters and how they play.  So it was nice having someone new.”

Maybe the 25-11, 25-14, 25-18 sweep didn’t surprise many on St. Paul’s side as they look to repeat as 1A Champions.  But the 11-0 start by the Bucks to start the game before Warrenton picked up their first win was perhaps a little startling considering the Warriors were sitting 13-10 and 8-0 in the Coastal Range League entering the game Thursday evening.

The 14-11 St. Paul advantage seemed to be right to close out the set.  The 13-12 Buckaroo lead following a Warrenton 7-2 rally seemed of note as St. Paul adjusted their game and their pace of play to match that of the Warriors, a little different for them coming off of their 14-0 Casco League season.

“It would definitely help us back into how we use to be…at a faster pace because we have been a lot slower throughout the year,” said Isabelle Wyss, who’s presence was felt in the second and third sets. “We tried to keep it up throughout this whole game so we can be faster, obviously that’s where we want to be with our game.”

It was an eye-opening game as they await the winner of Perrydale-Crosshill Christian Saturday afternoon at Central High School with that pace as they pulled away in the second set.  They separated themselves from Warrenton in the third set, turning a 6-6 game into a 20-11 lead after Jordan Caldwell’s kill.

The little mistakes however had opened the door for the Warriors, who had cut the lead to 23-18 before the Bucks finished off the sweep as St. Paul go into practice with something to work on for Saturday.

“Covering on our blocks we need to improve on and that’s what we’re going to focus on in practice,” said Sutherland.  “Our serving game and our serving can improve so we can focus on that for the District Tournament.” 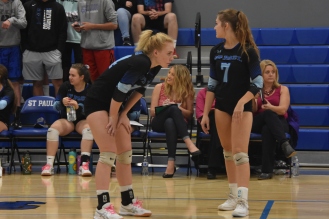