SILVERTON, Ore.–  We may have a new rivalry in the works.

Yes most ideal rivalries happen in the same classifications when you could feasibly play once-a-year, but hey, with ten minutes between Kennedy and Silverton anything can be possible.

“It’s really awesome because it really prepares us hopefully into State that if we have to go five games we’ll be ready for that,” said the Trojans Sophia Carley.

At 6-7 in the toughest conference in the State of Oregon in any classification in the Mid-Willamette Conference, Silverton finds themselves in a three-horse race for the last automatic bid out of the conference with Dallas and Crescent Valley knocking on the door.

The Foxes came out strong with a 14-9 advantage in the first set before the Trojans settled down for their 52nd-straight set win.  It was since September 7 against Sweet Home since Kennedy had dropped a set let-lone suffering a loss to those same Huskies at the Cascade Tournament.

Fast forward to October 21, that streak came to an end as Silverton snapped the nearly two month run that the Trojans had going for them.

“It was really fun to play against them,” said the Foxes Maddie Broyhill.  “Our teams are so closely skilled that even though we’ve lost, they pushed us to be a better team and play harder.  I was really pumped up to really have done that.”

Kennedy answered back with a vengeance in the third set, building a 18-8 lead in the third frame to take atwo games to one lead in the match.  The Trojans had been in one four-game match before, on September 3 against Salem Academy which Kennedy took the match that faithful day.

But, as the Foxes scraped and clawed to win on their final game on home court, the upcoming fifth-set was something that Kennedy wasn’t use to.

The last time the Trojans were in a five-set match was back on November 2, 2018 when they lost in five to eventual 2A State Champions in Portland Christian in the State Championship Semi-Final round.  This game felt like a playoff game as the game came down to the wire.

“Moving into playoffs we need to work on our fast sets and running plays.  We need to keep our game up, it doesn’t matter what the score is.  Just keep up the fast pace,” said Carley.  “It was good because we haven’t seen this competition.  Portland Christian, who I hope we face, they’re really good and are similar to (Silverton) with really good hitters.

“So us being able to go against them really helps us.  We need to work on that, so that was really nice.”

Carley’s hard-hitting style was matched by Riley Trager, setting by Broyhill was matched by the Trojans Ibeth Gomez and Ellie Cantu.  Names like Elise Suing, Paige Traeger, Chole Nealon and Emma Beyer on both sides of the net made this game into one in which it didn’t matter what classification you were in on this night.

Kennedy jumped out to a 7-1 lead in the fifth, only to see Silverton march back to get the game to 12-11.  And even though the Trojans pulled away for their 19th-straight win, for the Foxes who have Crescent Valley Tuesday before closing out the season Thursday at West Albany and next Tuesday at Corvallis, the game Monday sets them up on how to play as they hope to squeak into the postseason.

“In volleyball it’s a game of runs, so if you can’t mentally focus when you’re behind, there’s no way that you can comeback from that,” said Broyhill. “So that mental focus is going to be key for the rest of our games and the rest of our season.” 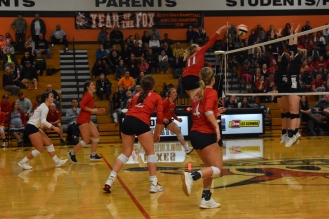 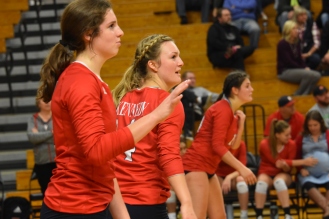 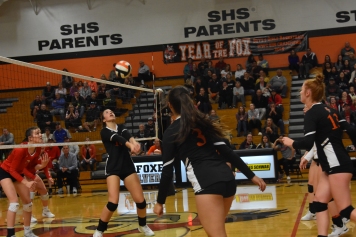 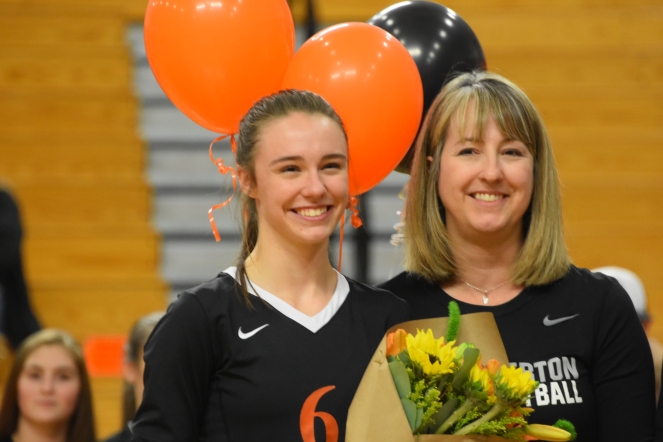 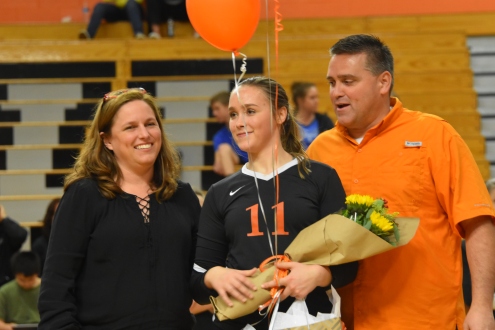