TURNER, Ore.–  The last time that Cascade had recorded a win against Newport was on September 24, 2015, a 1-0 victory on the road in Newport.

And over the last seven meetings stretching nearly four years, the Cubs have had the Cougars number with Cascade going 0-6-1 in that span.

In a game in which everything was going against them entering the second half, countless fouls and two yellow cards as they combatted the physical game that Newport brought with them from the coast, the Cougs struck twice in the second half to win 3-1 for their first win over the Cubs in eight tries.

“It was tough, we have to put all the work in and we had to work together as a team, trust each other and that’s how it worked,” said Fernando Ramirez.  “We’re going to work hard and hopefully we win State this year and league.”

At 3-1 in the season and 2-1 in Oregon West Conference play, Cascade bounced back from a tough Philomath loss Tuesday with Ismael Nunez striking quickly in the opening half of Thursday’s conference match-up.  Newport, with their physicality, pushed and challenged the Cougars to slip a goal by Angel Lopez entering the halftime break tied at one apiece.

Cascade had to stay within themselves entering the second half.  The Cubs were challenging them with their play to make the Cougars do something to get the refs to call something, but Cascade stepped up to that challenge as they went into the second half looking for their third win in four games.

“Our mindset after getting out of that first half, we knew it was going to be very physical.  We knew we had to come back at them with the same energy and contact they’ve been giving us,” said Jacob Farr.  “It was mainly staying with the mindset and making sure to stay clean, tone it down on the refs because we were talking too much, stay physical and stay in the game mainly.”

Danny Pelayo handed the lead back to the Cougars in the 43rd minute and Ruben Ruiz almost added to the lead halfway through the second half.  With Woodburn, who fell to Stayton later on Thursday 2-0 this upcoming Thursday, Cascade will be looking to build off of this Thursday’s success into Sweet Home Tuesday entering that big game at home.

“We just got to make sure we don’t overlook Sweet Home.  They’re a team, they’re a good team,” starts Farr.  “And right into Woodburn we just got to stay physical, we got to keep on them, they’re a high caliber team.  They got some quick forwards, so we need to play back and we got to make sure we don’t overlook any team and most importantly keep our head in the game.”

Ramirez tacked on the insurance goal in the 73rd minute to ice the Cougars first win over Newport in eight games.  Cascade travels to Sweet Home Tuesday for a 6:30pm first kick. 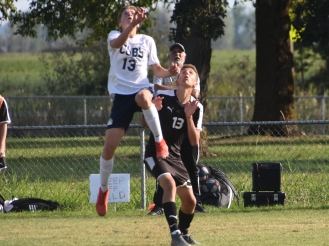