WILLAMINA, Ore.–  Cancer is one of those buzz kill words known to the English language, perhaps any language thinking about it.

43 children are diagnosed with cancer every day according to curesearch.org with 12-percent not surviving the disease.

On Monday night at Willamina, the Bulldog Volleyball team honored two of their own in the community and from Willimina Elementary School in Mya and Hayden who have been battling cancer.  Mya has leukemia and Hayden with osteocarcinoma as the Bulldogs celebrate them in their ‘Go Gold’ game against Harrisburg.

The idea came from Courtney Mendenhall, who is close with Willamina Head Coach Heather Hughes, following a benefit dinner for Hayden over the spring.  The idea was to do it during September, which is ‘Go Gold’ month.  Gold is the color for Childhood Cancer.

“It was really an honor to support Hayden and their family, they took a really cool trip to I think the Grand Canyon and we had a benefit event for them in the Spring.  But we wanted to bring that over to the Fall and our ‘Go Gold’ event,” said Hughes. “Part of it is the girls like spreading enthusiasm and support into the community.  We like to see that in the stands.”

During the start of the game Monday they went around with Gold Bracelets from the ACCO, the American Childhood Cancer Organization, to raise money to donate back to the organization following the game. Mendenhall and Hughes estimated that they raised about 50 dollars from Monday’s event following the game.  Across the way, Willimina gave Harrisburg gold shoelaces to help support the event by creating one large voice in support for the two girls.

Even though both Mya and Hayden were being honored and two bouquet of flowers ready, Hayden was the only one in attendance Monday evening as she was honored before the team introductions and national anthem.

Bulldog Junior Kallie Schoenbachler had delivered Hayden one of the bouquet of flowers to the Elementary School student prior to the game.  Yes, the game didn’t go as they hoped for Hayden and Mya as Harrisburg swept Willamina 25-18, 25-8, 25-13, but the meaning behind the event goes beyond the result on the court.

“It was great, I wish we could have done better in the game for her to see that…but I’m glad she was able to show up and just able to see that we are trying to support her in everyway we can,” said Schoenbachler.  “We’re really glad that we got the opportunity to get to ‘Go Gold’ this year and give out the bracelet’s and try to earn a little bit of money for that and do the best we can.  It was really an honor for us to bring them in and just try to show them how much we try to support them.”

“We want these kids to know that it’s more than just Volleyball, you’re making an impression on these kids in the community and it’s that community support/service that I want my team to have and I can say they clearly have that,” adds Hughes on the event. 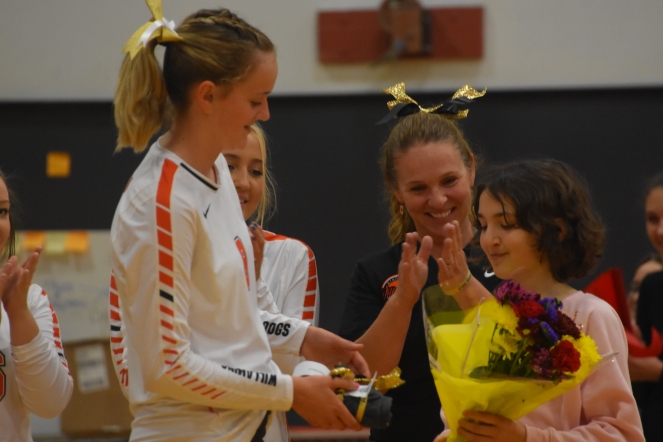 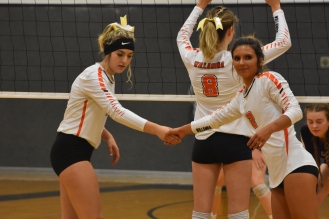 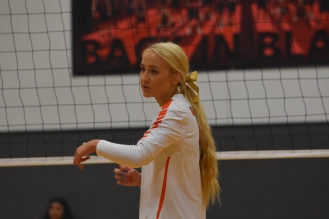 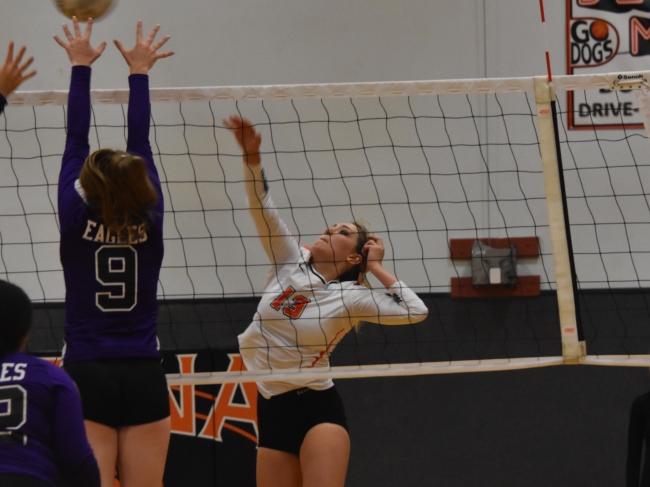 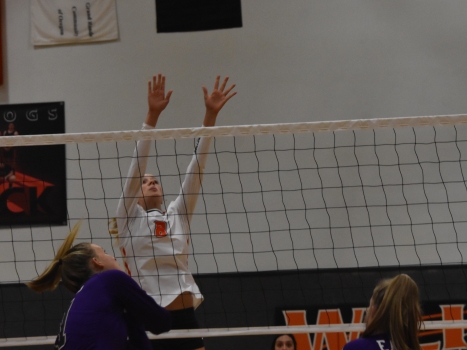 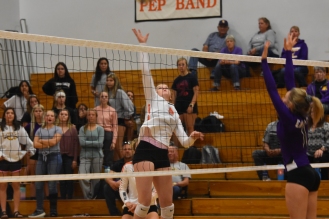