SILVERTON, Ore.–  It’s weird to think that a program that has seen four playoff appearances in the last four seasons will have three different Head Coaches during that span.

Kate Trimble, who came in last season late in the summer training season from Scio, continued the Silverton Volleyball streak of recent success with a 13-11 overall record and finishing 12th in 5A following their tough five-set defeat to Wilsonville in the first round.

“They were a great group of girls last year, even greater this year.  They’re so coachable, they were eager ready to learn and ready to go from the get-go at a fast pace.  It was a really positive experience,” said Trimble of the 2018 season.

Easily in the toughest league in the state across the six classifications with Corvallis (State Champions),  West Albany (third-place), Dallas (Fifth-place) along with Lebanon and themselves from Silverton being playoff teams entering 2019.

With the Spartans returning the bulk of their roster and the Dragons and the Bulldogs returning several players from last season, the Mid-Willamette will be looking to be just as tough as it was last year.

Running a unique volleyball drill, or game even, called the linear tournament that looks to be a 3-on-3 tournament in a space about the half of what you would normally play in, challenged the athlete’s trying out for one of the spots on the squad this season.  With how strong the league is expected to be, those in the Main Gym are looking to carry over their first full summer under Trimble into the Fall.

“It’s just a scoring system in where everyone plays, everybody plays against everybody.  It’s fast-paced, a lot of reps,” described Trimble on the drill.  “They have a lot of fun, they’re super competitive and so they go-go-go, they have fun with it.  But at the same time, we’re trying to teach them to have a killer instinct.”

Riley Traeger, Maddie Broyhill (senior) and Lily Horner (sophomore) return this season as Trimble will have a tough challenge, with the possibility for four total teams this year with Freshman, JV2, JV and Varsity this year to decide who will go where following try-outs this week.

“It’s great.  We have six or seven freshman that will be Varsity or JV this year.  It’s session two of Day 1, but they’re super talented,” said Trimble.

Silverton will jump right into the season August 30 at Mountain View before opening up league play at South Albany on September 5.  The Foxes first home game of the year will be September 12 when they host Dallas during a stretch of four straight MWC-opponents to start the year. 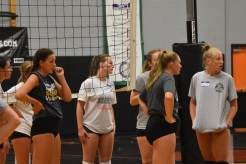 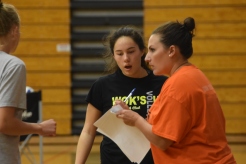 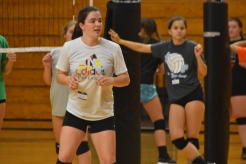