RENO, Nev.—  The last time that Cascade-grad and current-Lane Community College ballplayer Jake Davidson pitched, was four years ago during his sophomore season as a member of the Cougar baseball team.

Looking for an extra arm in their final game against Medford, Davidson stepped onto the mound in the sixth inning for the Withnell Dodgers against the five-time Oregon State Champions.  And outside a two-run homerun, Davidson forced three groundout in five batters faced Sunday afternoon.

Davidson steered away from pitching after his sophomore year due to stiffness in his arm, but for the incoming college Sophomore it felt good to get back onto the rubber after the time off.

“I felt like I was locating pretty well.  I warmed up in the bullpen and felt pretty good with all my pitches,” said Davidson. “It felt good getting back onto the mound, it’s been four years but it felt good.”

After an unordinary slow start that saw the Mustangs, who been making the bend to form with the postseason on the horizon with sub-state and the State Tournament at the end of the month, jump out to a 6-0 start after three innings of play.

Fatigue showed itself in Withnell in the squads getaway game before returning to Oregon for the final push.  But the fatigue for Medford too showed itself starting in the fourth inning where the Dodgers cut the six-run deficit to two with a four-run inning.

“I thought we were playing too tight at the beginning of the game and I felt like we did a better job towards the end of the game,” said Cameron Kallhoff.  “We scored a couple of runs but it wasn’t enough.  The end of the game will be something we’ll look forward to the next time we play them.”

Kallhoff went 2-for-3 with two RBIs while Davidson drove in a team-high three hits.  Michael Soper and Kaiden Doten each drove in two hits each in the game.

But with seven of their next 12 games against playoff caliber teams to close out the season, the game against Medford gives them a taste of what is to come with the Dodgers and Post 20 in a footrace for the automatic bid to State out of the league.

“I think it will help us a lot seeing those kinds of arms,” said Davidson.  “Yesterday we saw good arms and even the day before that, I think that’ll get us ready for the Dirtbags.  They’re our biggest competition right now.”

Withnell will be off Monday before kicking off their four-game series with Newport on Tuesday. 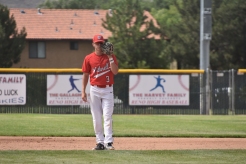