MOLALAA, Ore.–  Some would say that it is just summer league.  Others would say it’s a step in the right direction.

But North Marion, with two starters from 2019’s fourth-place team on the court, they found they found themselves going up against a St. Paul machine that went 30-0 in 2019 and adding a transfer starter from Gervais in Mary Davidson that presented a challenging task even during the summertime.

“It was really relieving that we ‘clicked’ and got together.  Yeah a lot of players left, we can still fill those those shoes and play our game and do good,” said Mya Hammack.

After splitting the day before at West Salem High School, the Huskies rolled to a 47-27 win over Country Christian to start their doubleheader of games on the road Thursday evening thanks to the help of the three-ball and their strong defense that carried over from 2019.

The three-pointer and defense helped North Marion build a 14-10 lead on the Buckaroos to start, but St. Paul’s defense accounted for the beyond-the-arch shots and challenged Hammack and Katie Ensign to have their teammates help win the game.

Isabelle Wyss showed why she was their number-one option this past season as she scored 16 points in the 40-37 Huskies win as she cut through the defense and showed her athleticism to help the Bucks take a 19-18 halftime lead on North Marion.

The Huskies held leads of five and six-points in the second half, only to see St. Paul hang around down to the final whistle.

“It definitely gives us a peak of what the season is going to look like,” said Katie Ensign.  “I feel like we all played like…not fully to our potential, but we played pretty close to it.”

Ensign, the lone height at this point with her five-eleven frame, finished with 12 points in the win.  Megan Netter and Mallory Patzer each had some crucial baskets down the stretch to go with the strong defense that the Huskies threw St. Paul’s way.

“I think we really rose to the challenge.  We came into the game knowing that they were a good team and that they were undefeated last year,” sad Ensign.  “So we knew if we wanted to contest to them, we needed to play our best.  It was a really fun game, it was close and competitive the whole time.” 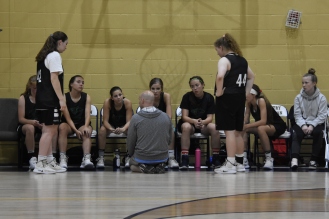 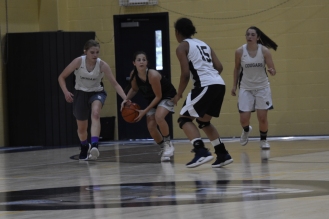