BEND, Ore.–  South Salem knew the challenge with Bend entering their doubleheader on the road Saturday.

Some pointed out, as both the Saxons and the Lava Bears sat in the Top 10 in 6A, that these two were the favorites for the Mountain Valley Conference-title this season.

South took the first game of the doubleheader 5-4 after a Ryan Brown Homerun helped the Saxons in the opener.  But a slow start after three innings had South finding themselves down 5-0 to Bend looking to stay toe-and-toe with Sprague for second in the league, sitting a half-game behind them in third by day’s end and a game ahead of McNary in the Standings.

The Saxons settled in as they slowly chipped away the deficit.  The deficit turned into a 5-1 hole, then 5-3, then Brown sent his second Homerun of the day of the three-RBI variety to hand South Salem their first lead of the game at 6-5 entering the bottom half of the sixth inning.

“It just kind of lights a fire under us and it gives us more momentum.  Even if it didn’t go over the fence, I was just glad I’ll be able to get my team up on their feet and be happy and yell and scream,” said Brown of his two homeruns on the day.

Brown finished with five RBIs and six strikeouts on the bump Saturday.  Noah Ferguson had four RBIs on 4-for-5 hitting.

Bend hasn’t been swept by a Salem-area school yet this season, having split with West Salem and Sprague earlier this league season with the Olympians coming close on April 20 in Salem as the Lava Bears rallied to take a 7-6 lead.  The go ahead run came off a pop-fly in the bottom half of the sixth inning.

There was bound to be a tight race to the finish with these two teams going at it though as Greyson Hanowell saw his deep fly-ball to center field caught at the warning track just shy of tying the game at seven apiece.

The catch caused Hanowell, who was halfway to second base when it was caught, took his helmet off to tip his cap to the Bend outfielder on the catch as he went back to the dugout as Ferguson singled to get a base runner on with two outs.

“You got to know that this a really competitive season, but you got to look at the big picture and just recognizing that guys are working their butts off,” said Hanowell.  “No matter who they are, or what they did, seeing that guy go out catch that ball…’You know what, that’s a great catch’.  That was a big picture look out of respect.

“At the end of the day, we’re all brothers and it was a great play.”

The Lava Bears would get out of the game with a line-out to seal their 15th win with South returning to Salem with their 13th on the season.

For the Saxons, their next three games this up coming week will be tough with West Salem coming to Gilmore on Tuesday looking to snap a three-game skid and South traveling to Sprague Thursday to face a surging Olys team for their two-game series looking to make the league title race that much closer.

“So many people want it this year,” said Hanowell about league.  “I think with Sprague, we just have to keep ourselves composed in our heads and not let their talk get to us.  With West, we just have to keep our games clean because they’re going to get the ball in play.  If we take care of the little things, pick each other up and keep it positive, we’ll do pretty good.” 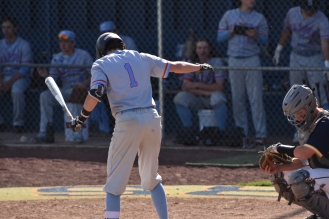 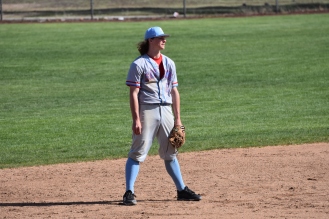