ST. PAUL, Ore.– The St. Paul softball team took advantage of the opportunities that Santiam gave them during the second inning to build a 5-0 lead into the third inning in the Lady Buckaroos 7-6 win Monday afternoon at home.

Behind Megan Tuck’s 3-for-3, three RBI day, it seemed as if St. Paul would have another of their big offensive games that they’ve been producing thus far this season.

“We’ve been working hard at practice leading up to these games and really starting off games well.  We’ve been struggling hard and not starting the bats until the fourth or fifth innings.  So that was really big for us to jump on them early and get started soon,” said Tuck.  36

But Tuck admits that the Wolverines were their toughest opponent this year and Santiam showed why in the Top of the fourth. Cassie Klagge hit an inside the park home run, Maddison Hicks had an RBI Single and a Wild Pitch score cut the once mountain of a deficit down to size entering the bottom of the fourth where the turned the order.

“Just a couple running errors, we couldn’t put consistent hits.  One bad inning with errors, fell behind.  Tried to comeback, didn’t have enough time to do it.  Against a team like this we got to get better,” said Wolverine Head Coach Greg Grenbemer.

Karlee Southerland and Jordan Caldwell drove in runs to push the St. Paul lead to 7-3 before Santiam answered back with three more runs, their sixth run coming when Hicks scored off an error with Brittany Grenbemer advancing to third and Kaitlyn Briley reaching first before heading to second.

With runners in scoring position, there was an golden opportunity for the Wolverines to possibly do some serious damage down 7-6 with two outs on the board.  It was great to see, mentioned Klagge as they were living up to how they are able to play.  But she admits too that this game is a good learning experience moving to Friday’s home game versus Portland Christian.

“It was really nice because I know that we’re capable of a lot.  It was really nice to see all of us playing like we know how we can play,” said Klagge.  “I feel like this is a game we could really learn from because we did some really good things but we also did some not so good things and I feel like we could learn from those and make sure they don’t happen again.”

For the Lady Bucks, it’s the start of league play Tuesday when the travel to play at Gaston to kick-off the 2A/1A Special District 1 conference play before the Greyhounds come up for a doubleheader Thursday.

And as mentioned before, as Rachel Vela got McKenzie Dodge to pop out deep to center field for the final out, this one-run game was a good measuring stick for St. Paul entering league quickly after this game barely concluded.

“That was a really big test for us.  We haven’t had a game for us that has gone all seven innings so far this season.   So that was a really good measure of our team that we can stick together and we can finish out a game because going into league play, that’s going to be huge,” said 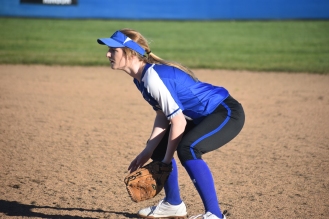 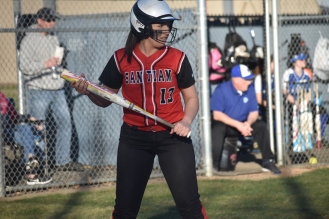