Starting with Kamden Combs Sacrifice Hit in the bottom half of the fourth inning that got one out on the board and ending with Lara Hunter’s RBI single that put the Lady Warriors up 7-6 on the Dragons following Dallas’ sustaining a 6-2 lead entering the frame.

“I think we really came out on the bats, we hit very well and defensively we had a few mistakes but if we fix them we’ll be good,” said Combs, who pitched 5.1 innings, striking out three and went 1-for-3 at the plate.

The Dragons, who are replacing Lauren Walker, Jordan Dippel, Emily Mat and Jayden Wynia from last years team to this years team answered in the top of the fifth inning when Maddie Loughary singled to bring Ruby Earhart home from second base with one out.

Loughary and Maddie Doig split time in the circle as Katelynn Simmons heal up from a offseason concussion that forced the number-one pitcher out of their season opener Wednesday versus Tualatin and Thursday’s game at Philomath.

Doig, who pitched all of Wednesday’s game and the first four innings of Thursday’s game, handed the reigns to Loughary with the game tied at seven as the sophomore pitched three shutout, five strikeout innings that kept the Warriors off the board for the reminder of the game Thursday afternoon.

Combs bowed out of the game with an out in the fifth to save her arm for Friday’s game versus Lebanon, the sophomore’s third game this week pitching, that sixth inning seemed to have negatively hurt her squad as they gave up five sixth inning runs and couldn’t replicate that fourth inning magic that got them back into the game.

“It kind of brought us down and we stopped hitting,” said Combs of the top of the sixth inning.  “But if we keep our heads up, that shouldn’t have happened.  Just keep up with our work on the bats and just fix those little mistakes and I think we’ll have a good fight with Lebanon.”

With Dallas, they are off for 11 days before opening up the North Medford Spring Break Invite on March 25 against Roseburg.  Something that is good considering they are banged up and missing one of their crucial parts of the team in Simmons while making sure they’re healing up from these first two tough challenges right out of the gate.

“It’s going to be a big thing, starting three pitchers.  Maddie was healthy which was so helpful because she’s super reliable.  But having Yaya (Simmons) not being 100-percent is not especially with Yaya’s concussion, there’s a lot in which she can’t do.  It’s really tough, really good to have her come back soon,” said Earhart, who had a homerun off of NW Vandals 14U teammate Combs in the second inning.

“It’s going to be really important to get them back on this side because they’re a big part of the team.  Yaya’s bat, Maddie’s  throwing, Maddie’s bat.  We all work together, it’s going to be good. 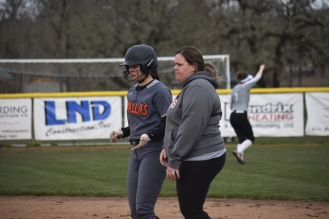 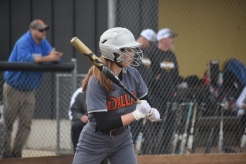 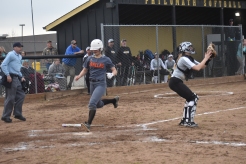