MT. ANGEL, Ore.– It’s weird to see someone not named Tressa Reidman in the circle for Kennedy when they open up the 2019 season against Scio at home Monday afternoon.

Nonetheless, against a young Logger team in front of them that lost their fair share of Seniors from last season, Grace Schaecher kept a still tough Scio team off the scoreboard entering the third inning.

Even then, as the rust showed for both squads, the defending 2A State Champs in the Trojans still were holding onto a 3-2 lead entering the fourth inning against a 3A State Semi-Finalist from last season.

“It was really awesome, we were really nervous coming out this morning.  But coming out and building a lead, it was awesome,” said Schaecher, who tallied 15 strikeouts in her first start of the year. “We got out more then our defense, we kind of crumbled but we haven’t practiced too much out here, so we just expect to get better from here on out.”

The relentless Winter had played tricks on the development on both of these teams as baserunning and too defense plagued the Loggers who had two full-time starters return in Kasidee Parazoo and Olivia Zeiher on the field with Varsity returners in Meagan Mikolas, Ashlynne Ziebert and Alexus Franklin.  Each of the latter three saw Varsity action in 2018.

Schaecher limited the Scio offense in the fourth to a Xea Sprague single before Schaecher picked up a strikeout and forced a groundout to Sophia Carley to quickly get two outs on the board and seemingly to regained their focus from the opening two innings.

That was, until a walk that was followed up by a Ziebert RBI Single to tie the game at three had awoken those bats that the Loggers had built a living on the past four years, taking a 6-3 lead into the bottom half of the inning.

The Scio defense looked Logger-ish with a 1, 2, 3 inning in the bottom half of the inning, but couldn’t add to their lead in the fifth with Aleks Eyles scoring on a wild pitch in the bottom of the fifth to put pressure on the Logger bats to beat them.

Scio’s offense, that slowly came around just two innings earlier, returned.  It wasn’t the Brox Bombers like it was last year, but they complied hits and played small ball that was really unorthodox of them compare to recent years.

Zeiher’s three-run, bases-loaded bases-clearing triple had been the lone ‘big’ hit as the Loggers scored nine runs in the top of the fifth that pushed their lead to 15-4 on Kennedy.  Their philosophy is to get girls on base and let their big hitters like Zeiher bring them in.

And it was certainly a big confidence booster for Zeiher who had a tough go at it in her 2-for-4 day.

“Me personally I needed the self-confidence myself.  So hitting that, bringing everyone in.  Getting us closer to 10-running them was big for me,” said Zeiher. “The one thing we talk about in practice is to get our girls on base and have our big hitters run them all in.  That’s what we did, that’s our game plan and it ended up working out for us.”

The Trojans got one run in the bottom half of the sixth, but nothing more to help extend the game beyond that as the game ended after the sixth.  And with their second game Tuesday versus Dayton, who won a high-scoring affair with Cascade if it doesn’t get rained out, they already know from their first-time seeing live action how they can improve on their defense. 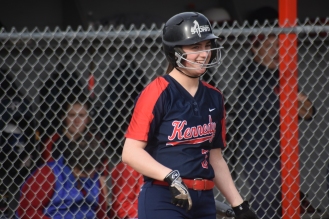 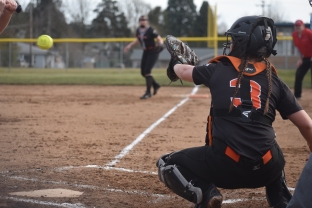 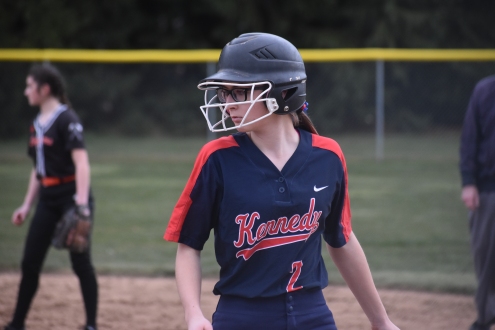