But, as Santiam showed and proved on January 7 in Mill City when the team’s first met, they are not an easy out.

Down 23-11, the Wolverines Jasymn Clark drained a three to turn the 12-point deficit into a manageable nine-point hole entering the second half when their press defense helped them to create a 23-14 run that ended with McKenzie Dodge’s free throws with 2:58 remaining in the contest.

“It felt great, I mean we started off really slow and we tend to do that.  We lost this game by one point that we shouldn’t have lost,” said Maddy White.  “We picked it up and stopped forcing it.  We need less turnovers, we forced a lot.  We need to slow it down; our press break is our main weakness and I think everyone knows that and we need to work on that in the future.”

White’s lone three was part of Santiam’s 9-0 run to start the half before Mary Davidson’s five unanswered pushed Gervais’ lead back to eight.  The Wolverines got it down to four soon after behind their defensive pressure with the Cougars trying to adjust on the fly of Santiam’s halftime adjustments.

“It was tough, but we just had to keep working hard and keep playing defense and our offense and just keep playing our game,” said Gervais’ Isabel Contreras, who finished with six points in the win.

And with three games left until league playoffs begin, the old saying of ‘You’re as strong as your weakest link’ may come into effect with the Wolverines are currently tied with Western Christian for third at 5-6 and Culver a half-game behind them at 5-5 for the fifth and final League Playoff spot.

For their press break, its just mental they need to work on with it mentioned White.

“I think we can improve it mentally.  A lot of us get down on ourselves, we throw a bad pass and try to blame it on somebody else and I think if we just pull together, I think mentally we can do this,” said White.

The Gervais defense held Dodge to 13 points, a six-point decrease from the first time the two squads met, but Dodge’s seven second half points helped keep the Cougar defense honest as they drifted out to account for Clark, Shaynne Ward and the guard on the perimeter.

Dodge’s 1-for-2 at the line in the fourth quarter tied the game up with 2:58 in the game, but a quick made free throw by Bella Vasquez and two technical foul free throws off a loose ball scramble saw Contreras push Gervais over the top in the win Monday night.

Contreras, who missed some pressure free throws against Colton on January 9, said it was nice to bounce back Monday to help her team.

“It was pretty good to have redemption.  I mean I was nervous up there, but you just got to be calm and stuff,” said Contreras of the free throws.

And though they hold a two-game lead now over the Wovlerines and the Pioneers for second, Gervais could still feasibly lose that second spot entering league playoffs if they slack off.  But the Cougars hope that doesn’t happen.

“It’s really nice, but nothing is for certain yet,” said Welburn, who had a team-high 12 points.  “So we just got to, every game fighting.” 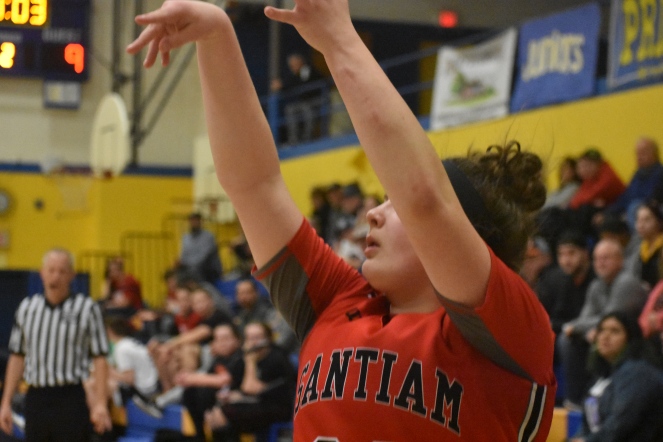 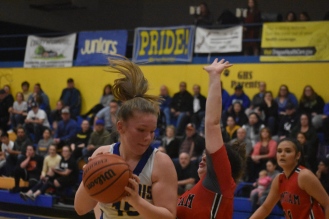