The Titans picked up a forfeit win at 106 and Lance McClung picked up a West Salem pin at 113 over the Scots Tess Barnett.

Dylan Gatchet handed the Titans their third match win when he held off McKay’s Patrick Neevel at 120 4-3.  But the Scots athlete made Gatchet work for the win, espically down the stretch.

Neevel went up 3-2 after the first period, but Gatchet quickly got a takedown to make it 4-3 in the second round as his top defense kept Neevel on the mat entering the third and the final 30 seconds of the match in the third period.

Gatchet admits that his conditioning needs work as Neevel began to find gaps in Gatchet’s grip in the closing half-minute of the match with Neevel standing up and nearly escaping twice that could have tied the match at four to force overtime.

“I was trying the best I can to get out, I could have done better to actually win that match.  Just using that switch, just trying to use that more probably would have helped,” said Neevel on making his move sooner.  “Just trying stand up man, it’s honestly really tough.  But all of us are out here trying the best that we can.”

Gatchet held on for the win, but the Scots would get their first win in the 126 pound match by decision 8-3 from Bryant Mendoza.

The Titans picked up wins at 132 and 138 before Jesse Rubio, younger brother of David Rubio, sparked three straight wins when the younger Rubio picked up the first round pin at 145.

Erik Ambrocio built a 5-1 lead on West Salem’s Colorado Olson entering the third period at the 170 match.  Olson, despite the deficit, kept grinding before Ambrocio had to leave the match with a hyperextended knee that got the Titans their first technical ‘win’ since Jack Livengood’s forfeit at 138.

McKay got back-to-back forfeit wins and Israel Rivas handed the Scots a 36-33 lead entering the final match of the night between Kai Holdaway and Zair Ku Beiza.

It was Ku Beiza’s second match back from injury and was thrust into the 285 weight class even though he gave up about 50 pounds to Holdaway in weight.

Early on Holdaway took advantage of the 230-pound Ku Beiza and it looked like the Titans would escape with a 6-point pin with Holdaway near-falling Ku Beiza that made it 5-0.

Ku Beiza, who looked like RoboCop with a shoulder wrap and a knee brace on, needed about 15 seconds of injury time after working his way out of the near-fall with his shoulder going in-and-out of his shoulder.

“I knew I could continue once it popped back into place.  When it popped into place, it felt great but I knew something happened.  As soon as I threw him, I just felt something in my shoulder and then I tried getting out,” said Ku Beiza.  “Then when I tried leveling my arm and I came up, I just felt it go a little bit.”

The junior recollected his thoughts and went back to work with the team points at stake.  Ku Beiza answered the bell as he picked up the pin of Holdaway to seal the 42-33 McKay win on Wednesday.

“I knew coming out that it was going to be a tough match, so coming back to it when I was on my back and flipped it on him, it just felt amazing,” said Ku Beiza.

The Titans will be at North Salem Thursday with JV at 6pm and Varsity at 7pm.  McKay will travel to Cottage Grove for a tournament Friday and Saturday at Cottage Grove High School. 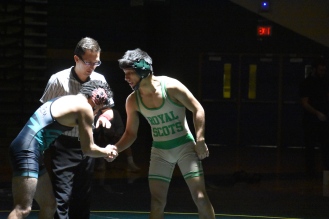 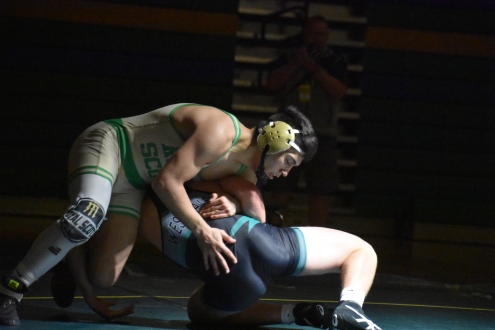 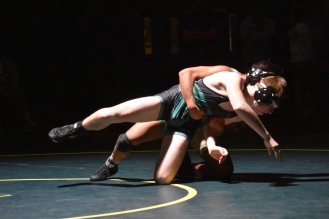