TURNER, Ore.- Redmond showed during the opening half that they weren’t afraid to use their shooters as they took their healthy hacks from three and from mid-range, so Cascade decided to counter that with a press defense that got in the faces of the Panthers.

“We came out and we hit a couple of shots in the beginning that got us going and we picked it up on the defensive end,” said Brandon Starnes. “We knew that they were going to run so we had a game plan going into it.”

There were a few possessions where neither team could score before Carson Molan drained a three to make it 26-15 with under two to go in the half.

Redmond drains a three to get it under 10, Molan hit another three for his third three-pointer of the quarter.

By halftime, it was 31-18 Cascade behind seven three-pointers to Redmond’s two.

“At the end of the first half, we finished really well, we knocked down some shots down at the end,” said Molan. “When we went into the locker room coach told us we had to keep the tempo up and we knew that we let them in at the end, but as soon as that happened, we turned it up.  Bench started to talk, players started tp talking and we turned it up shut the door on them.”

The Cougars continued to push their three-point tempo, but only one fell through by Matt-Alex Raney to make it then 34-18 during the opening three minutes of the second half.

The Panthers  got it to 34-23 before Molan hit on his fourth of six three’s in the game of the game to put Cascade up 37-23 before timeout was called.  Molan finished with 18 points, his six three’s were part of 13 three-pointers made by the Cougars Saturday night.

But the press continued as they caused turnovers that led to another Molan three and Starnes added another three to make it 43-23 as the twilight of the third came around as the point differential remained around 20 for the remainder of the game.

The down side of the up-tempo that the Cougs were trying to run was the fouls, they were already giving Redmond free throws by the end of the third quarter, and with better teams it could be the difference maker down the stretch in those games.

Its something they could work on with Central coming to town Tuesday.

“We’re still progressing,” said Starnes, who had 10 points in the 62-44 win at home. “We’re making it a lot better fine-tuning stuff.  The fouls are going to come with how aggressive we play, but other than that it’s getting there.”

Kellen Sande had nine points in the win, Drake Davis had another eight. 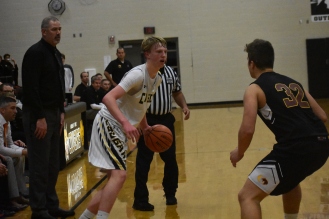