CORVALLIS, Ore.– Just write it off as first game jitters for the North Marion Huskie Girls Basketball Team to start the 2018-2019 season.

The game was a last second add to the Lady Huskie schedule leading into their  Wednesday game versus Stayton at home, North Marion found themselves facing a Corvallis team that had already had one game under their belts.  But nonetheless, the Huskies do what they normally do and went to work Monday night on the road versus a Spartan team that was in the 5A Elite Eight four of the last five seasons.

The Green and Black saw a lot of offensive opportunities in the opening half versus the Spartans but couldn’t land many of their shots they put up.  Those opportunities allowed Corvallis to convert those missed opportunities them into points on the other side of the court to help build a 20-8 lead after the opening quarter.

North Marion kept battling entering the second quarter, going on a 12-4 run to start the frame to cut the lead to 24-20 after a pair Mya Hammack free throws with 2:45 left in the opening half before the Spartans pushed their lead to ten at the halftime break 32-22.

“It was tough especially since we hadn’t had our first game yet and we were still trying to get a feel for the ball coming in and a feel for the game coming in,” said Mar Verastegui, who was one  of three Huskies with her 10 points, along with Hammack (11) and Katie Ensign (10) to score in double-figures.  “Other teams have played so it was especially tough because they came out strong and we weren’t able to stay with it.”

Bodine mentioned about their low shooting percentage, including 10 lay-ins throughout the game that they left a possible 20 easy points on the table that would’ve made a big difference in the game in the 56-41 Corvallis win.

“We scrapped a little bit in the second half on the defensive end trying to get back in it.  We got our hands on some deflections and steals and stuff, so that’s good,” said Bodine. “Just some positives but when you shoot so poorly, when you dig yourself a hole like we did, it’s really hard to get out of that hole.

“We missed a ton of free throws, we literally missed 10 lay-ins at the rim and that’s twenty points.  Your giving away 20 points and you lose by 15, it’s a different ball game.  We just need to get out of our own heads and just play basketball, we’re thinking too much.”

And it’s the first game and the jitters are there Bodine added that caught him off-guard a little bit as he felt they were ready entering the game and gave Corvallis due credit with their ability to hit on the three-ball.

The Spartans would hit three of their seven three-pointers during the third stanza to build some second half momentum and by the start of the fourth quarter up 15.

Interestingly after that 20-8 first quarter, the Huskies were neck-and-neck with Corvallis by taking the second quarter 15-12 and barley losing the third 13-10 on the score-by-quarter lines as North Marion made attempts to claw back into the game.

The Huskies got to nine in the third twice and 11 in the fourth, but couldn’t land a string of shots together to go with their defensive stops down the stretch.

“We got a lot to improve (from).  We didn’t have a good shooting game, so that’s just going to fall naturally when come to play you have your bad games,” said Verastegui.  “I think effort wise we just need to pick it up from the beginning from the get-go and just come out strong so we don’t have to come back up and try to comeback up.”

Tip-off for Wednesday’s game versus Stayton is at 5:30pm at home. 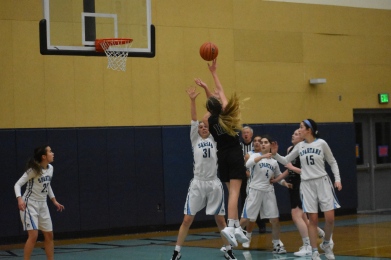 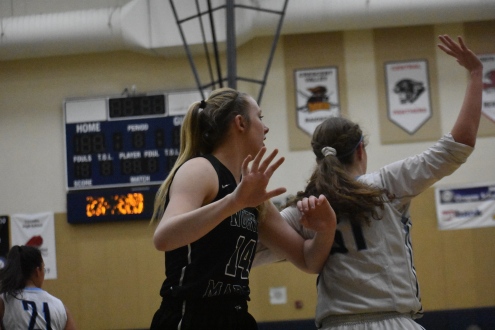 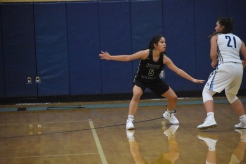 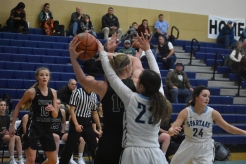