The IBC 5th/6th graders needed a big score to take the lead over Boise and found it by one of their bigger guys in Hatimu Letisi as he made two big receptions, one including the go-ahead touchdown, to put Island Boys Club up a touchdown and now needing to advance to the semi-final round against Seattle Sound.

“It was crazy, I think it was one of the toughest games that I have ever had against a really good team at about our skill level,” said Letisi on the game.

IBC got their stop defensively as they briefly celebrated before heading to the Clackamas High School football turf against a familiar foe in Seattle.

They battled as both teams traded blows, but down 23-14 the fifth-sixth grade squad went into the two-minute blitz and got the score down to 23-21 and were beginning to drive for another go-ahead score as they did before against the Seattle Sound team that defeated them earlier in the day.

But Seattle interrupted the mojo magic with a timely interception to end the 23-21 game.

Head Coach Nick Fuimaono gave his team props for how hard they battled and worked Saturday as they reached the semi-final round in the Eforce Tournament.

“Boise was such a great squad.  All these squad are great squads, so I’m proud of my boys performing here against great talent.”

For Letisi, though he’s a lineman by trade, said that facing this kind of speed and talent will help him down the road as he prepares for the Fall season ahead.
“It’s going to help us with speed because these teams are really fast compare to us,” said Letisi.  “This is going to help me because I’m a lineman and it’s going to help me with my speed playing center.”

As they, the fifth-sixth graders, exited the field, the Island Boys Club seventh-eighth grade squad soon arrived and were taking the field about at 30 minutes after their younger counterparts were as they took on Boise Evolution in the semi-final round.

Coach KJ McCrae spoke towards how much his team has improved even since their first tournament on May 5th as they entered their semi-final game Saturday afternoon.

“The development and improvement from some of these kids have been ridiculous.  Even our first tournament on May 5th until now, the kids have develop as players,” said McCrae. “I told them that our quarterbacks are making the right throws, going through their progressions.  Our receivers are working on their releases and getting open, even with bigger guys in front of them and we wind it back to the first tournament where we had a lot of trouble with that.”

The seventh-eighth graders of the IBC battled against the competition in front of them with their defense having to work against the tough quarterback and his receivers around him and trying to answer offensively with the tough defense that their offense was combating with as the squad finished third in the tournament.

“But the game comes down to the quarterback and putting it in the right place, and that quarterback you can tell put the ball on the receivers and he trusted them to be where they’re suppose to be and that makes a lot of difference in a game just like in real football but in 7-on-7 even more.”

And as the youngsters wrap up for the day, the High Schoolers will arrive on Sunday to take over from what their younger counterparts have done during the first day of the EForce 7v7 Tournament as those team’s too look to set up some momentum entering the preseason for their respective teams this summer entering the Fall. 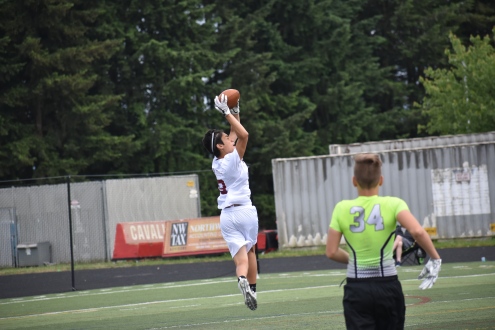